So I haven't written in forever.  Brief update: I finished the nursing part of my program and I take the NCLEX (board exam) on Friday. And I'm looking for a job. And taking graduate classes.

But enough about me. One of the reasons I have this blog is for myself to remember the various antics the boys do.  I want to remember them and even though I plan to put all these types of things into my scrapbooks, I'm currently more than four years behind in my books and am sure I'll forget things by the time I get caught up. So I am recommitting to writing the various stuff the boys do on this blog. Mostly for myself, but obviously anyone else can enjoy them as well.

Matthias: Matthias started preschool last week. He is super smart.  He can say and recognize the alphabet (though he misses a couple of letters once in a while).  He counts to 20. He is starting to do simple addition.  He loves trains!  He is definitely quieter and more sensitive.  He loves to sit and play by himself, but also enjoys playing with Ezra.

Ezra: Ezra is my outgoing, talker. He talks up a storm and even if no one is paying attention to him, he doesn't stop talking and makes up stories. He loves "strawbears" (strawberries).  Yesterday, Ezra and I were going to Jimmy Johns to pick up supper and he told me a story about how we were on the Island of Sodor (Thomas the Tank Engine reference) and going to find a Jimmy Johns.  He's a people person who hates being alone.
Posted by Roshelle at 1:57 PM No comments: Links to this post

It seems to be a battle that I have to face every day.  Some days I feel like I am balancing things pretty well, but there are other days where I feel like I can't win no matter what I do. I feel guilty if I can't spend time with the boys because I have homework. I feel guilty if I don't have time to study as hard as I want to or have to put off some reading. I am a bit of a perfectionist, so I have a hard time if I feel like I can't do my work to the best of my ability.

This week was really hard.  Today I had a big test.  I wanted to do well and had planned on studying all day yesterday. Monday, our daycare provider called me and told me that the other kids she watches had strep throat, influenza, and pneumonia and were definitely sick last Thursday and Friday.  Monday night my boys started coughing. Daycare provider was concerned about strep throat, so she wanted the boys seen by a doctor. So I had to take three hours off from studying to take the boys to the doctor.

Strep test was negative. Boys sent back to daycare.  We were told that they would probably get worse before they got better, but should call if they got a lot worse. Well by the time I put the boys to bed, their coughs were a lot worse and they started running fevers. Ezra's got over 103.  So I had to call the doctor back and she wanted to see the boys again this morning for a influenza test.  And of course they were coughing so bad, I brought both of them in bed with me, so I could listen to them breathe.  And then I hard to rush this morning to get the boys in to the doctor  and then back to daycare before I had to leave for school.

Influenza test negative.  So back to waiting to see how they do. The doctor is concerned that they might develop pneumonia, so we need to watch them and monitor their fevers.  I have to call the doctor again in the morning.

So after I dropped off the boys, I had to rush to school, take a test and then sit through two others classes.  So needless to say, I am exhausted and ready for spring break!
Posted by Roshelle at 9:33 PM No comments: Links to this post

So Matthias pooped on the potty today! Three times!  So for all of those who think, so what's the big deal? Matthias has never purposely pooped on the toliet. (he did it accidently once)  This has been the major hang up for potty training. He pees great, but he refused to poop in the potty. And let me tell you we were getting sick of cleaning up poopy underwear.
Hopefully this trend will continue and we have successfully potty trained one of our children! Now to get Ezra over his fear of the potty.
Posted by Roshelle at 10:36 PM No comments: Links to this post

This semester is kicking my butt

which is why I haven't posted in a while.  This semester is busy.  Two graduate classes, two undergraduate class, two clinicals, and the rest of my life means I have very little free time.

The boys are getting a lot bigger. I love watching them grow older and older every day. They are both talking up a storm and learning so much every day.  They are both counting and can say both a meal prayer and a bedtime prayer. Matthias is pee potty trained, but not poop potty trained yet. Ezra is still scared of the potty.

Calvin is doing well. Still at the same job.  We're praying a lot about what is next for us.  This summer I'll be looking for a nursing job and we'll be deciding whether to stay where we are or move.

Well, I'll try to update more often!
Posted by Roshelle at 8:33 PM No comments: Links to this post

I was so busy this year, I did not get Christmas cards and letters out. So I thought I would do a bit of a years in review. 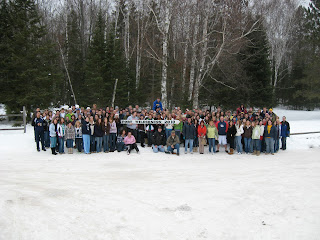 February: I found out I was accepted to Marquette University for their Direct Entry program for Nurse Practitioners.

March: The boys and I took a trip with Calvin's parents to see Calvin's sister and do some wedding planing. The boys got to see their first hockey game. 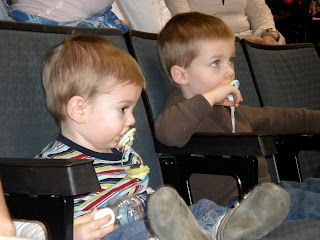 April: We were able to spend Easter with my parents. We also finally bought a second car after four and a half years of marriage and having only one vehicle. We got a 2010 Toyota Corolla and I love it.
May: We started off the month celebrating Matthias' third birthday. I still can't believe how big he is.  I was the matron of honor in my sister-in-law's wedding and Matthias was the Flower Boy. The boys (along with my mother- and father-in-law) were involved in a car accident, but thankfully injuries were very minor. 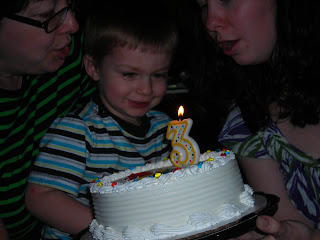 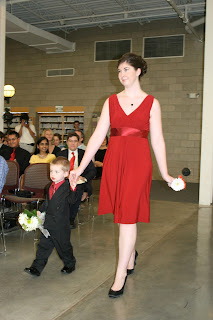 June: I started the DE program at Marquette and our lives got very busy. We all adjusted well. At the end of June, a bad storm brought a neighbor's tree down on to our property. We were without power for a couple of days and had a minor gas leaked and a big mess to clean up, but we were blessed that the damage was not severe. 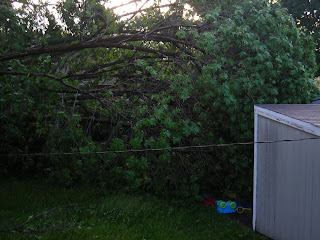 July: Another busy month. Our PT Cruiser got to the point that it needed to be replaced (much to our budget's dismay), so we bought a 2008 Chrysler Town and Country.  Calvin loves his mini-van! We also had another visit from Calvin's parents, sister and her new husband.
August: I successfully finished up the summer semester and we took a great vacation to Branson, MO.  Unfortunately, while Calvin and I were out for dinner for our Anniversary, someone hit our van in the parking lot and left without a note or anything. That meant yet another insurance claim! I also had my wisdom teeth out. (Ouch) 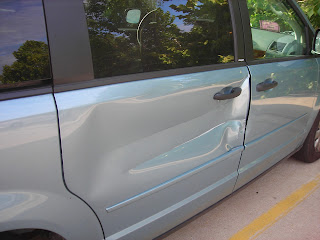 September: I started Fall semester. We also went to my uncle's cabin for Labor Day, which was a nice break.

October: We were blessed to again have a visit from Calvin's parents visit (they live far away, so visits are always a treat).  We also had a visit from some dear friends who moved away. 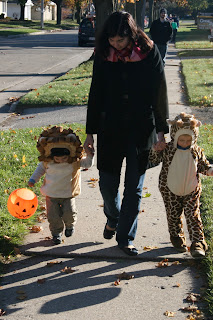 November: We celebrated Ezra's second birthday. My baby is such a big little boy and I can't believe it. 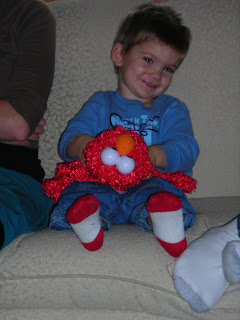 December: I finished another semester of school and am now halfway done with Phase 1 of my program.  We flew out to Alberta for Christmas with his whole family. It was a great time! Now we are having a weekend with my family.
So over all, it was a pretty good year and we were blessed, especially with safety.  I am excited for the New Year and wish you all a blessed New Year!
Posted by Roshelle at 12:50 AM 1 comment: Links to this post

Sleeping in the Nude

So tonight, I went to tuck the boys in. It was a little chilly in their room, so I was tucking them in and noticed Ezra's bare arm sticking out above the blanket. That was odd, since he was supposed to have long-sleeve pjs on. So I pulled down the blanket expecting that he had taken his shirt off.

Instead I found that he was completely naked under his blanket. He had even taken his diaper off. I was laughing so hard while I was dressing him again. I guess he was more comfortable that way!
Posted by Roshelle at 11:19 PM No comments: Links to this post

I am thankful for the Christmas season. I love spending time with family and exchanging gifts and how happy people seem to be (for the most part) at this time of year. It makes the cold weather easier to handle.

This month of saying what I am thankful has been difficult, but really good for me to think it all out. Maybe I'll do this again next year!
Posted by Roshelle at 10:28 AM No comments: Links to this post

Roshelle
I am a former Stay at Home Mom, now full-time nurse-midwifery student. This blog is about me and my family and the adventures of having two boys 18 months apart.